When thinking about what to create for the New York edition of the States of Dress project, I -like countless others across the world- thought first of America’s most famous metropolis: New York City. The first time I ever visited New York as a young artist was during a massive garbage strike, and it left a lasting impression on me to see mountains of garbage piled so high on busy city sidewalks. I was raised in Chicago, where we have alleys to hide our garbage. I was surprised to discover that New York is a city without alleys, resulting in every home and business -even the fanciest restaurants- leaving their piles of trash right outside their front doors on the sidewalk. Even when there is not a garbage strike, as I found during many subsequent visits, the garbage bags regularly lining the sidewalks in New York take some getting used to. To me, the sanitation workers that mange these tiny mountains every week are the true heroes of the city.

However, by no means did I mean any disrespect or want to create something “ugly” for this metropolis of art, beauty and fashion. I therefore strived to create a “couture”, jet-black, fashionable New York dress, that just happened to be made from garbage bags. To me, this piece represents all the dramatic contrasts inherent to New York: wealth and poverty, art and homelessness – beauty and trash.

To fill the bags, I used another New York icon – crumpled-up New York Times newspapers saved for me from the daily leftovers at the Marmara Manhattan Hotel. This was a great material to work with, filling yet lightweight. As an added benefit, the dress was recyclable when finished!

And the beginnings of the project. I worked in an art studio in Brooklyn rented from fellow artist Rob Kimmel, who was out of town for the month with his family in Morocco. Special thanks to friend Stacy Lee who visited the studio and helped me stuff bags with newspapers!

I also made a detachable train so that I could walk in the dress, then add the train at the photo shoot.
Blog

I found the fabulous hairstylist Jamie at Emilia’s hair salon in Brooklyn, down the street from the art studio. She understood the project immediately, and created the perfect “trashy-elegant” hairdo for the Garbage Dress photo shoot. She even used crumpled up black garbage bags hidden inside the hair to create volume!

Here Jamie is teasing the hell out of my poor hair! This is going to take a long time to untangle!!

The finished masterpiece! Thanks Jamie!
Blog

This is the first day shooting the NY Garbage Dress, in a loading dock with great graffiti near the art studio I rented in Brooklyn from fellow artist Rob Kimmel. The first challenge is getting me up onto the dock in the dress! Here I am being hoisted up with a little help from my friends, volunteers T’ai Jamal Hanna and Jay Loebscher.

I did not attach the train until we got to the shoot location to help with ease of movement.

This pigeon behind my head hung out the whole shoot, protecting its nearby nest.

Now we are trying a seated shot, with some styling help from T’ai.

Manning the video camera on the left is volunteer Katrina Stachowski.

…and getting back down!

T’ai making sure everything looks good for some street shots, taking advantage of the beautiful architecture of the next door building.

Thanks so much to my helpers! From left to right: Katrina Stachowski, T’ai Jamal Hanna, Jay Loebscher, and photographer Layo Mayoli

This is the second day of shooting the NY Garbage Dress. We found a location on the Upper East Side of Manhattan where the city keeps garbage trucks parked in a large lot and along the street. Perfect place for a guerrilla photo shoot! The city workers let us shoot for about 20 minutes before we got kicked out…

On my left is Heather Lamb, a wardrobe stylist along to assist. And on my right is Anthony Gatto, juggler and budding film maker who generously offered to film the day for my documentary “States of Dress”

Stephan Landry (right) was the photographer for the day’s shoot

Final Garbage Dress shots!
Blog
“Casino Chip Dress”
was photographed on the Eldorado dry lake bed in Boulder, NV.
It is the Nevada dress for the ongoing “States of Dress” series

“Casino Chip Dress” is made of over 2000 casino chips,
each with 6 drill holes joined by clear zip ties.

At the photo shoot on the Eldorado dry lake bed…

Special Thanks
to Kent Thomson for providing studio space to create this dress,
Todd VonBaastians of Atomic Todd Gallery for his generosity and support,
The Gambler’s General Store for partial donation of materials,
Benoit Beaufils for his tireless enthusiasm & assistance,
Ross Gibson, Jim Slonina, Tarra Scarff, my Mom & all the other volunteers
for their help & friendship.

This photo was taken by the great Dave Proctor (www.daplv.com)
with hair and makeup by Keely Zelanka.

Blog
This is my 100th post on my States of Dress blog!
To celebrate, I am announcing the launch of my very first States of Dress mini-film, “Wyoming”. It is the first in a series of shorts about the ongoing project. It shows how I made “Willow Creek Dress”, a floating dress of woven willow on Lower Piney Creek, at the Jentel Artist Residency Program in Banner, WY.
To view, please click on the link below. Enjoy!
http://www.youtube.com/user/STATESOFDRESS

The July / August exhibition of “State of Dress” at the New York Mills Cultural Center in Minnesota marks the first one-woman showing of this series. On display were 40″ X 60″ photographic prints on canvas of all the “Dress” sculptures so far…

“Pinecone Dress’ was shipped here for the exhibit, from the MacNamara Foundation Arts Residency in Maine where it was created. This is the first time an actual “dress” has been displayed in addition to photographs of the work. The tough nature of pine cones made this possible. I was amazed when we opened the crate at how well they had weathered the long journey.

Here is my friend Hope lending a hand touching up the dress with the back-up pine cones I mailed with the dress from Maine.

In addition to the “State of Dress” exhibit in the main gallery, the front of the cultural center held some of the two-dimensional work I also created while an artist in residence in Maine. While on break from creating “Pinecone Dress”, I collected plant life around the island and preserved it on canvas to create these “Leaf Dress” paintings.

Here is a close-up from the large “Leaf Dress” painting, with blackberry leaves preserved in their red fall color.

Also on display is the new work, “Collecting Kisses”. This is an interactive installation of three dress paintings on which viewers are encouraged to leave their lipstick kiss prints. Many ladies and a couple men took me up on it during the opening, and I hope the art continues to collect kisses during the run of the show.

Luckily for me, Wendy DesChene was the visiting artist to the NYMRCC while I was in town. She was an enormous help to me during the installation of the “State of Dress” exhibition.

Please check out her amazing artwork at wendydeschene.com 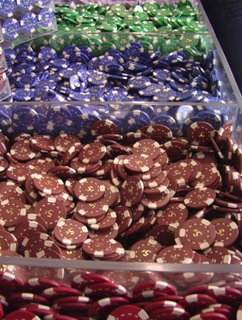 I am back in Las Vegas and I am planning on making Nevada’s dress project out of casino chips, to honor this state’s unique gambling history. This will be a time consuming endeavor! Upon completion I plan to photograph it out in the desert to bring in the natural beauty and vast landscapes surrounding Nevada’s sprawling cities. I wish to thank Wendy and all the folks at the Gambler’s General Store in Las Vegas for their very generous donation of casino chips for the project! 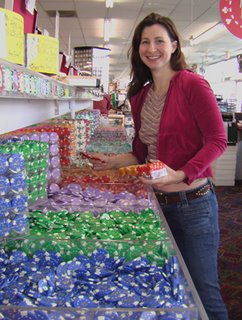 Here I am at the Gambler’s General Store picking out my casino chips …like a kid in a candy shop!

Here I am drilling holes in over 1000 casino chips in preparation to link them together. I am working on the floor of a room in my friend Kent’s house, which he has generously donated to me to use as my studio. Thanks Kent!!

Here are the chips once they are linked. At this point I am using a garment tagging gun to hold them together, for it’s ease of execution and “invisible” linkage, but I will see if the results are strong enough once the dress starts to take shape… 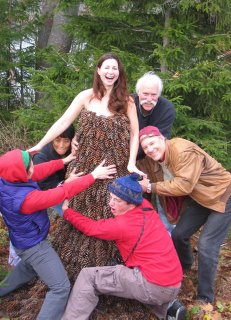 A huge thank you to my fellow artists who volunteed their time to help set up and document “Pinecone Dress”. I could not have done it without you! Clockwise from center: Duncan Slade, Robert Brun, Ian Sexton, Jennifer Sanchez and Colette Fu. 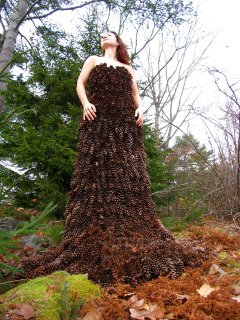 Here are the best two pictures from two days of shooting “Pinecone Dress” outside on location. I am still deciding which one will be the final image… VOTE for your favorite! Number One on the left, and Number Two on the right! (photos thanks to Colette Fu)

Number Two Wins! It seems most people felt it looked more organic, like it grew up from the forest floor… 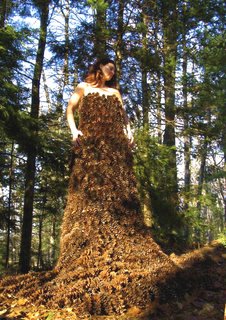