In the winter of 2017, I had the honor of creating a custom lingerie bodypaint for “The Most Naked Woman” of burlesque – Michelle L’amour.

A glimpse at the scene at Robin Slonina‘s DragCon booth in Los Angeles, 2018!

Damn I love exploding buildings! The historic Frontier Hotel imploded at 2:30AM on November 13th. We scored an amazing view of the spectacle after bluffing our way into a “Press Only” parking garage across the street… Check out Jimmy’s YouTube video of us on the scene!

LINK TO OUR VIDEO:
http://www.youtube.com/watch?v=73yIORe7W9g
Blog

On September 29, 2007, I participated in a circus-themed extravaganza love-fest of a wedding, and married my love Jim Slonina.

Jim is an actor and currently works as a clown for the Las Vegas spectacle “Le Reve”, so we pulled in the circus theme with an air-jumper, popcorn and cotton candy machines, Steve August juggling, and Maria the Snake Babe with an 8-foot boa constrictor. The ceremony began with my friend Marah running down the aisle to stage-whisper to the groom that the minister had a flat tire and she couldn’t make it. So while Jim made an embarrassed apology to the crowd, our good friend Claudio Carneiro (an amazing Brazilian clown) stood up from the audience to save the day, doing magic tricks in the aisle and taking over as minister. There was lots of gags mixed in with the true lovey-dovey moments, culminating in an interruption during the “Speak now or forever hold your peace” bit, when Renaldo, an acrobat in a karate costume, ran down a hill and attacked. You can check it out at the photos at the link below:
Jim & Robin’s Wedding Pics

I am currently in Austin, TX, working on a mural project for Gatti’s Pizza, and managing to get in just a little sight seeing as well…

The Mexican Freetail Bat is the mascot of Austin, after the city accidentally built a perfect bat habitat along the bat’s migration route from Mexico. The city considered them pests at first and tried to get rid of them, but Austin citizens fought to save the bats and now “bat bridge” is a big tourist attraction. 1.5 million bats summer in the long thin recesses under Congress street bridge, rearing their babies before heading back to Mexico. At sunset they swoop out in a massive group to fly east up the river feeding on 20,000 pounds of bugs a night!

It was cloudy the night we visited the bridge, so they did not make their dramatic flight, but stayed close to home, darting over our heads to feed on mosquitoes.

Something amazing has been growing in Austin, hidden in the backyard of a small, nondescript South Austin home. It is the Cathedral of Junk! Refuse is lovingly attached together into rooms, towers and walkways to climb and play in.

Vince is the creative genius behind the cathedral.

My Austinite friend Thor climbing one of four towers….

The view from the top!

Spamalot comes to Vegas, fresh from its run on Broadway. It is showing in the sister theater to Le Reve at the Wynn, which meant we were lucky enough to be invited to the premiere opening bash. It was a really fun chance to support our new friends in the cast (pictured above with buddies Ed, Tony and Ashley). Plus, I got to meet and hang out with Robin Williams, one of my big faves, as well as meet Steve Martin, and the whole Monty Python gang, including another big fave John Cleese!

I have to say, I love Las Vegas! Where else could I go to a Barrack Obama rally one day, and a Nicky Hilton wardrobe unveiling the next? Another bonus: imploding buildings!!! Here I am with my man Jim, who gets geeked out at all things explosive. We camped out on the roof of the Wynn Casino parking garage for three hours to get a prime spot to film the historic Stardust Casino implode -after 48 years on the Las Vegas strip. It was an amazing spectacle, with 5 minutes of fireworks culminating in a pyrotechnic countdown, with flares spelling out “10, 9, 8…” on the full height of the building. We then watched the crowd on the strip run from the dust cloud, until it rolled towards us, covering our car and sending us sprinting inside. We had to wait another 3 hours for the Star”dust” to clear, so we ran around inside the Wynn until 6AM with some of the awesome, fun cast of “Spamalot”, the new Monty Python musical at the Wynn. Viva Las Vegas! (click on image to enlarge) 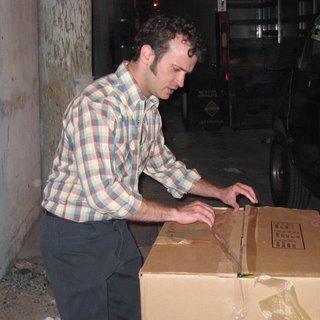 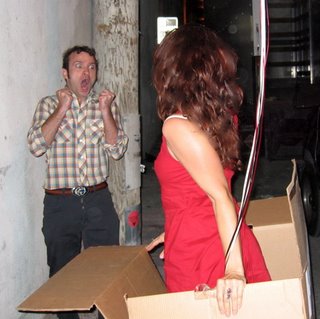 Before starting the community mural project I am working on in Minnesota, I flew home to Las Vegas to surprise my boyfriend Jim for his birthday. He was at a bar with friends when he was led outside to the alley to open his “present”. He hadn’t seen me for 5 weeks and wasn’t expecting me back for his birthday, so he was pretty shocked, to say the least. 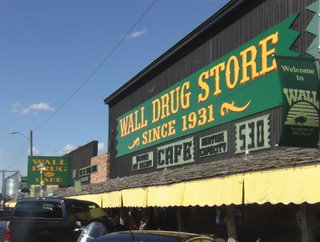 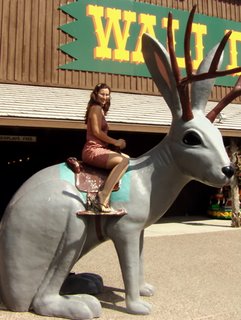 After the Willow Creek Dress project in Wyoming was done, I began traveling again, roadtripping in my van through South Dakota to Minnesota. I passed Sturgis during their biker fest, so I saw my share of bikers, passing and waving to me on the road with signs like “Sturgis for Bust” strapped to the back of their hogs. On the way I stopped at the famous “Wall Drug” in Wall, SD, a drug store from the 1930’s which has taken over the Main Street of the small town and become a kind of surreal theme park. It had a t-rex that roars every 15 minutes, a 5-banjo-playing machine, a “creek” where kids can pan for gold, a pharmacy museum, a tiny chapel, walls of historic photos, a soda fountain, shops with western wear and fossils, and loads of other random weirdness. But my main destination was the Corn Palace in Mitchell, SD, which is a 114-year-old building covered with murals made of 200,000 ears of corn. There has been a terrible drought in the Dakotas and Nebraska, so this year the towers were not covered, and I met people who were comparing the weather there to the dustbowl of the 1930’s. 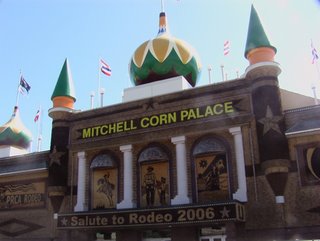